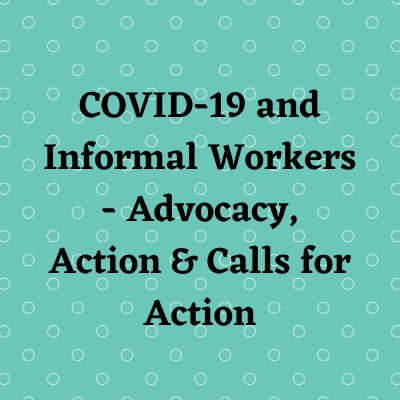 WIEGO is gathering and analyzing news from around the globe to capture the impact of this global pandemic on the world’s two billion informal workers, and some of the promising interventions by policymakers to alleviate the poverty, inequality and suffering this crisis will cause.

Almost 25 million jobs could be lost worldwide as a result of COVID-19, says ILO – The ILO notes that an internationally coordinated policy response is needed to prevent widespread unemployment, underemployment and income loss. “These measures include extending social protection, supporting employment retention (i.e. short-time work, paid leave, other subsidies), and financial and tax relief, including for micro, small and medium-sized enterprises.”

Advocacy by and for Informal Workers

HomeNet South Asia finds that the home-based workers (50 million people, mostly women, in the region) have lost all their income because there are no new orders in this crisis — but these workers are not included in govt relief packages. Read their Charter of Demands to help these workers.

In India, the lockdown to stop COVID-19’s spread was sudden, total, and enforced–leaving millions of informal workers in desperate circumstances.

The Self-Employed Women’s Association, a longstanding trade union with 1.7 million members, sent an appeal to the Minister of State (IC) for Labour and Employment and Union Minister of Finance, urging the government to provide emergency income  support and distribute food rations to all families of informal economy workers to tide over this crisis, so that they are able to sustain their basic needs. In India, informal employment accounts for more than 93 per cent of all employment.

Within days, the Indian government announced a Rs 1.7-lakh-crore relief package aimed at the poor, including poor workers. The most important aspects of this package, which SEWA and others have demanded, are the supply of free rations through the Public Distribution system (FPD) and an accelerated disbursement of welfare funds for building and other construction workers. However, SEWA’s demand regarding the National Rural Employment Guarantee Scheme was not met in full. It falls to state and local governments now to implement/deliver this package of relief measures.

WIEGO’s new board chair, Mirai Chatterjee, is the chair of SEWA’s Cooperative Federation and leads the social security team of SEWA. She recorded this video message of solidarity and hope in support of informal workers everywhere—on March 26, 2020, after the complete lockdown in India.

Speaking of the effects on informal workers, she says, “Not only is their health in danger, but also they have lost their work. They have no source of income. Food is an issue–food security was always an issue anyway for these are workers… who have very low levels of social security and social protection.”

She goes on to explain how SEWA has been responding, including by getting information out to members fast. SEWA’s child care centres are providing food to young children and their families, and its low-cost health centres are providing medicines and have created affordable hand sanitizers. And she details what SEWA sees as the necessary path forward, and its plans for a livelihood restoration fund.

In this Economic Times op-ed, View: The finance minister’s Covid-19 relief package is helpful, but there are gaping holes in it, Jean Drèze asks, “How are they supposed to feed themselves and their families for 21 days, possibly much longer, without any work opportunities? Rickshaw-pullers, construction workers, migrant labourers and many other groups are also at risk.” He offers a thorough assessment of the gaps in the government’s plan.

In Thailand, WIEGO’s members report that the informal workers’ movement, with support of our alliances especially the media, strongly called for emergency essential measures. On March 23, the government announced special measures for informal workers in response to COVID-19 include:

This provides for 3 million people in a country where informal employment accounts for about 56% of total employment. A website to apply for the emergency aid is expected to being operating at the end of March.

Health care: Thailand’s universal health coverage (UHC) will cover all necessary tests and medical treatments for COVID-19 patients. Informal workers who are  insured through the Social Security Scheme will get compensation for lost work income.

In Mexico, the Head of Government announced support measures for indigenous artisans but left out the majority of the informal sector and domestic workers. WIEGO’s Focal City Mexico campaign created this video (in Spanish) calling for them to include and transfer resources to replace income for all informal workers affected by the crisis.

In a joint statement, the Council of Global Unions, representing 200 million workers, has called for urgent action by governments to protect workers. These include: “Immediately extend paid sick leave entitlements, maintain incomes and extend social protections to all workers, including formal, ‘gig’, precarious and informal workers, regardless of their employment status…”

A Joint Statement by 10 South African organizations which represent millions of informal workers calls on government to act now through financial support and other means.

In Jamaica the government announced on March 26 that taxi drivers, barbers, market vendors and domestic workers would be among those who receive emergency assistance from the government.

In Peru, the Central Government announced a cash allowance of 380 soles(equivalent to about 110 USD) to families living in poverty for the current 15 days of quarantine. The allowance is half the value of the monthly basic basket of goods. The government has managed lists of the poor for about 10 years, and updates them annually (last update March 2019); these lists are also used to t give access to free health insurance for the poor. The lists are being expanded to include waste pickers who belong to organizations with municipal contracts.

The government has now said they want to extend the program to cover informal workers, but do not have any way of identifying them. Because there high levels of registration of many types of informal workers in Peru, the WIEGO Focal City Lima team has been in touch with the government to assist with this. However, there will be challenges relating to street vendors — those who do not belong to an organization may fall through the crack.

Newspaper vendors in Lima are allowed to work. In fact they have been thanked for doing so by the government and are protected by the police.

The Canadian government has established a $107 billion (CAD) emergency aid plan (about US$75 billion). The

package is designed to get cash into the hands of workers–including the self-employed, contract and gig employees–who have lost work or are unable to earn due to COVID-19 (including for illness or caring for others). The government expects to have a fully operational registration system by April 6, with payments reaching residents by mid-April.

“When you’re trying to help get money out to people, speed is of the essence,” Prime Minister Justin Trudeau said. “Especially in an unprecedented situation like this one.”

The package includes a new Emergency Care Benefit of $2000/month for the next 4 months to provide taxable income support to workers. There is also new money for low- and middle-income parents and funding for businesses, including small enterprises.

In Brazil, “The government has introduced emergency measures. Informal workers will each receive 200 reais a month (£33; $40). But Brazil’s currency is plummeting…. It is not enough to buy food for a month for a family, let alone cover rent and bills. This is a menacing virus, but just as menacing is the threat of hunger – how can these families live like this, and for how long?” reports Katy Watson at BBC News. Read Coronavirus in South America: How it became a class issue

In South Africa, the government has taken decisive action to stop the spread of COVID-19, but the lockdown will exacerbate the already precarious position of the country’s many working poor, development strategist Kate Philip writes in the Daily Maverick (22 March).

An opinion piece in Modern Ghana notes that in 2014, the Ghana Statistical Service estimated that 86.1 per cent of all employment was found in the informal economy (for women, it was 91 per cent) and descries the lack of action beyond some public service messaging around hand washing. The author, Delali Adogla, notes that some lack running water and also says, “The traders, hawkers and customers in Makola have no choice but to continue with their hand to mouth existence regardless of the threat. Their families must eat” before saying that the informal sector workers are the most vulnerable and that the State should be prioritizing their needs.

In an article about the global response to support children, Joan Lombardi, PhD, an international expert on child and family policy, lists organizations and resources around the world who are trying to address the needs of children and families during this crisis. “People are responding in unprecedented ways that go well beyond borders. Hopefully this can lead to improved conditions for children, a stronger safety net and an enhanced ability to live together in harmony in the future,” she concludes.

Karsten Noko writes in Al Jazeera, “In Africa, the crisis has not yet reached epic proportions. But the cracks caused by existing inequalities are already showing.” He discusses the realities of informal workers and those who live in slums, who lack access to water and healthcare, and who cannot stay home and off work without incurring terrible hardship. In Africa, social distancing is a privilege few can afford.