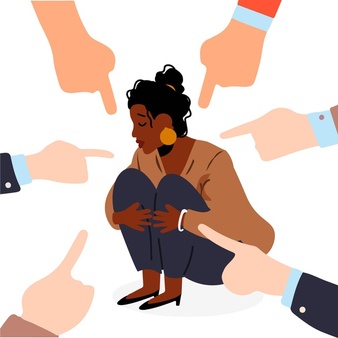 By Shakira Choonara and Vicci Tallis

It seems to take a lot to shock us. We get shocked when we see violent and racist situations, like the murder of George Floyd in the United States. In South Africa the killing of, Collins Khosa who suffered brutality during the Corona Virus lockdown, raised some protest. Although, in Africa, we are no longer “shocked” or even bother taking action at the loss of life by militarised undemocratic states.

Closer to home, in our field, global health, we cannot say we were shocked that former staff at Women Deliver took to Twitter last week to expose the inherent racism within the organisation. An ex staff member posted on social media that Human Resources (HR) asked her, “Is this your hair”.

Women Deliver is an “unwavering advocate for girls and women” according to the website – and “stands in solidarity with the movement for racial justice”! Except, it seems, they may have forgotten to extend this to their own staff.

We know the racism is everywhere and plays out in many ways, so many of us have experienced it and still continue to experience it. Exposing racism is a gold standard for accountability and transparency. It is step one, chipping away at systems which use us, abuse us and eventually exclude us if we stand up to injustice. The exposure of injustice is also good in that we see how people of colour and youth are ‘used’ to line pockets, build, and maintain a power stronghold.

The same can be said for women’s rights issues. These injustices are usually ‘dealt’ with by carrying out investigations, statements, a top-level resignation. Although, these ‘actions’ hide and bury the truth, it usually means business as usual, unless we assume the responsibility to ensure it doesn’t.

For real transformation of these systems, what is required; disruption, unequivocal and unapologetic demands. Off hand, we compare; the announcement of the new cohort of Women Deliver (WD) young leaders. The announcement literally went viral, but the next day or so, the experiences of these staff who spoke out about racism in the ranks were barely supported.

This is the nature of speaking out, you’re standing up against a powerful (well resourced) organization, powerful stakeholders and support is thin, everyone’s politically correct, treading carefully, too afraid, too much to lose or can’t be bothered to support.

In total there are about five cohorts of Women Deliver Young Leaders. That’s well over a thousand young leaders. A collective statement was issued, as Women Deliver Young Leaders. Honestly, we sit back and ask the question where is the real power of ‘activists, advocates, young leaders’ who resonated during those Women Deliver conferences? Why have you not stepped down, boycotted and disassociated completely and immediately? Now that would put weight for transformation and the organization taking this seriously!

Then, we ask the question to all the global organizations and world leaders; Canadian Prime Minister Justin Trudeu specifically comes to mind as there is a video of him kneeling down for Black Lives Matter. Last year he was a huge part of Women Deliver in Canada, these stakeholders hold significant power. Where is the immediate outcry or do major stakeholders only care when racism results in the loss of life? All the global organisations who attended the conference, sat on podiums and promoted their message and organisations. There is a deafening silence from you all.

Those of you in the field know very well this is the case, the status quo, a system has been set in terms of race, gender, class and geography. The first hurdle is to, despite circumstances, complete education, the second is employment entry and the third is staying in the space. Many of us tend to leave the space because of the trauma and mental health issues that come with fighting it. Or we simply refuse to be “used”. Others simply conform, become gatekeepers, the ‘front’ progress to a ceiling set for them, stay there, and are essentially used to show ‘inclusivity’. This is the norm in many of our spaces.

Finally, this is not to say our entire space and every professional is discriminatory, we should not generalise, but nor should we ignore rampant and systemic racism and be silent or make excuses for the perpetrators, especially when it is exposed.

Engage with other advocates by sharing your blog and join the community.