Panel Discussion: The Impact of Covid-19 on FGM/C Trends

Panel Discussion: The Impact of Covid-19 on FGM/C Trends 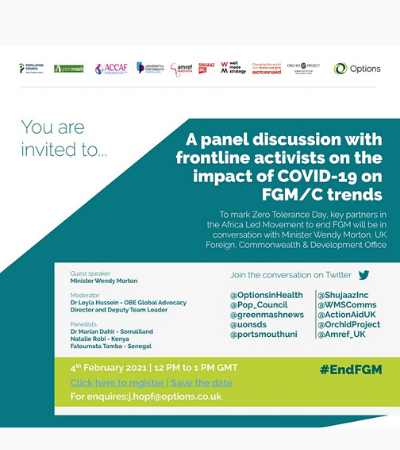 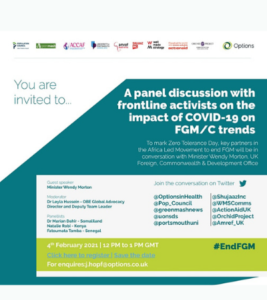 To mark International Day of Zero Tolerance for FGM/C, the Support to the Africa Led Movement consortium will host a panel discussion.

Minister Wendy Morton MP (FCDO’s Minister for European Neighbourhood and the Americas), will join a panel discussion with frontline activists on the impact of COVID-19 on FGM/C trends.

Female genital mutilation and cutting (FGM/C) comprises all procedures that involve altering or injuring the female genitalia for non-medical reasons and is recognised internationally as a violation of the human rights, the health, and integrity of girls and women.

Girls who undergo FGM/C face short-term complications such as severe pain, shock, excessive bleeding, infections, and difficulty in passing urine, as well as long-term consequences for their sexual and reproductive health and mental health.

Although national data on FGM/C prevalence shows girls and women are affected in 31 countries, most of which are in Africa and the Middle East, FGM/C is a universal problem and is also practised in some countries in Asia and Latin America. FGM/C continues to persist amongst immigrant populations living in Western Europe, North America, Australia, and New Zealand.

To fully eliminate FGM/C coordinated and systematic efforts are required. These must engage whole communities and focus on human rights, gender equality, and sexual education, and also pay attention to the needs of women and girls who suffer from its consequences.

The Support to the Africa Led Movement (ALM) consortium in collaboration with the FGM Data Hub are is united behind the vision of creating a world where girls can exercise their power, have bodily autonomy, their voices are heard, and are free from all forms of violence.

Support to the ALM’s work will strengthen the already active and growing end FGM/C movement through innovative approaches at every level of influence to ensure that ending FGM/C is prioritised at local, national, regional, and international levels and that evidence-bass interventions are implemented at scale.

In addition, through global advocacy and increased commitment to ending FGM/C, the Support to the ALM consortium will use accountability approaches to respond to emerging trends, including the medicalisation of FGM/C, cutting girls at a younger age, cutting of older mature women, and cross-border movements. 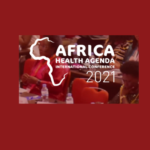 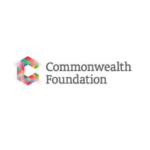 Equality and Justice in Covid-19 Responses 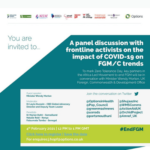